Music plays an enormous part in the success of the German Reformation. Martin Luther builds on communal hymn singing as a most effective means of spreading the word. Chorals become part of the fabric of Protestantism, building on the medieval heritage of Meistersinger and monasteries alike and informing the enormous output of Baroque music, culminating in the Cantatas by J S Bach. Henrike Lähnemann, Professor of Medieval German Studies, is working with Alex Lloyd, Lecturer in German, and Tom Hammond-Davies, Director of the Oxford Bach Soloists, to recreate the sound of the Reformation.

For 2017, the ambitious plan was to perform the four cantatas composed by J S Bach over the years for Reformation Day (31 October) in four different venues and formats. The first cantata, ‘Gott der Herr ist Sonn’ und Schild’ opened the series during Bonn Week 2017 as an interactive event with a dialogue introduction, a reflection by a member of the congregation, and everybody joining in the chorales. The second cantata, ‘Gelobet sei der Herr, mein Gott’, will take place in St Michael’s Northgate and is scheduled for Open Doors weekend. The last two are College based close to the actual quincentenary: After a study day on the Reformation in Exeter College on 29 October ‘Nun danket alle Gott’ will be performed and finally on 31 October ‘Ein feste Burg’ will be part of a service of Lutheran Vespers in New College. 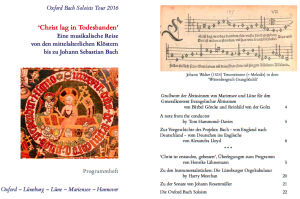 In the Summer of 2016 the Oxford Bach Soloists undertook a tour to Northern Germany with Henrike Lähnemann. Follow the epic journey from medieval liturgy to J.S. Bach and from Kloster Mariensee to the Michaeliskirche in Lüneburg: view the Programme online, live podcasts from the concerts on the Oxford Bach Soloists blog and photographs by Alex Lloyd and Jennifer Bunselmeier.

Watch the Gesprächskonzert in Kloster Mariensee with a performance of all stages of the Easter hymn, culminating in a full performance of ‘Christ lag in Todesbanden’

A short documentary film, ‘Singing the Reformation’, was launched at the Taylor Institution on 11 November 2016. The film, of the TORCH-funded trip of the Oxford Bach Soloists to Northern Germany, was shot by Alex Lloyd on the Faculty's new visibility equipment:

The launch also celebrated several projects in the Faculty which have been sponsored by the EHRC Visibility Challenge, such as the website Mapping Catherine’s Correspondence.

Henrike Lähnemann on the genesis of the famous hymn 'Wachet auf, ruft uns die Stimme' by Philipp Nicolai, its publication history and its links to pre-Reformation literature. Talk filmed by Alex Lloyd in the Old Library at St Edmund Hall. 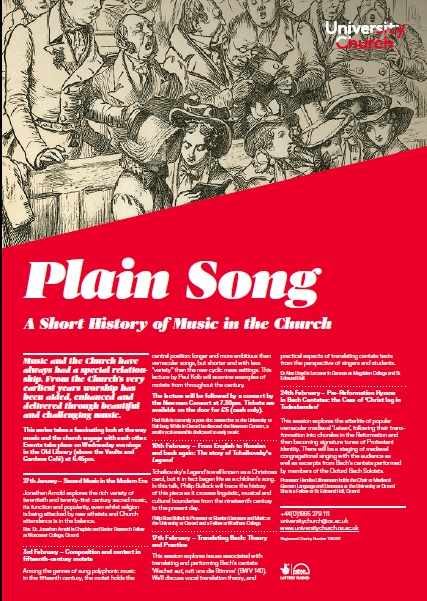 Two talks in the Hilary Term 2016 lecture series put on by the University Church, Oxford, prominently featured hymns linked to the German Reformation. Penny Boxall, the organiser, writes: “Music and the Church have always had a special relationship. From the Church’s very earliest years worship has been aided, enhanced and delivered through beautiful and challenging music. This series takes a fascinating look at the way music and the church engage with each other." On 17th February, Alex Lloyd spoke on “Translating Bach: Theory and Practice." This session explored issues associated with translating and performing Bach’s cantata ‘Wachet auf, ruft uns die Stimme’ (BWV 140). She writes: “We’ll discuss vocal translation theory, and practical aspects of translating cantata texts from the perspective of singers and students.”

On 24th February, Henrike Lähnemann spoke about “Pre-Reformation Hymns in Bach Cantatas: the Case of ‘Christ lag in Todesbanden’”. This session explored the afterlife of popular vernacular medieval ‘Leisen’, following their transformation into chorales in the Reformation and then becoming signature tunes of Protestant identity. There was a staging of medieval congregational singing with the audience as well as excerpts from Bach’s cantata performed by members of the Oxford Bach Soloists. 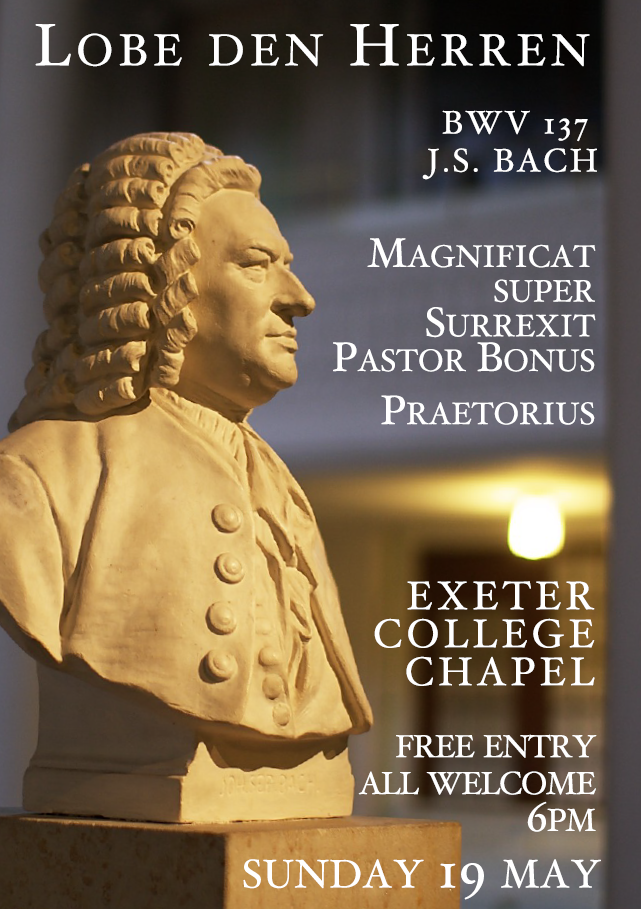 This service is based on the service of Vespers (Abendgebet) from the Protestant Church in Saxony, Germany. Vespers forms the framework for the main spiritual offering of this service, Bach’s Cantata ‘Lobe den Herren’, BWV 137.

Vespers is one of the monastic offices, for early evening. Its central features are psalmody, readings, the Magnificat, and prayers. This evening’s setting of the Magnificat is the 1611 Magnificat super Surrexit Pastor Bonus, by Michael Praetorius. This is a troped Magnificat, in that the verses of the Canticle are interspersed with German Eastertide hymns.

This term the Bible stories illuminated and illustrated in the Chapel’s windows provide the lectionary for Services. This Sunday’s first lesson Belshazzar’s feast [Daniel 5] may be found in middle section of the window above the arch on the left hand side as you face the altar. The second lesson is taken from John’s Revelation, and may be seen in the last window on the right hand side.

The address will be given by Professor Henrike Lähnemann.

The talk will be on ‘O großes Hochzeitsfest! Medieval Mysticism and Baroque Rhetoric in Cantata BWV 162′

When Bach chose the text for BWV 162 (Ach! ich sehe, itzt, da ich zur Hochzeit gehe), he picked a brand-new publication by the Weimar court composer Salomon Franck. The short talk will look behind the scenes of the fashionable cantata format to discover the medieval roots of the idea of marrying Christ, the Reformation theology of the promise of grace and the Baroque rhetoric of such great compounds as Seelengift and Adamsrock.

The presentation will be interspersed with musical examples presented by the Oxford Bach Soloists to show how Bach transformed these different textual elements into a rich and colourful musical offering.