For 2017, the ambitious plan is to perform the four cantatas composed by J S Bach over the years for Reformation Day (31 October) in four different venues and formats. The first cantata, ‘Gott der Herr ist Sonn’ und Schild’ opened the series during Bonn Week 2017 as an interactive event.

The performance was supported by funds from the Auswärtiges Amt via the German Embassy, and part of the Reformation 500 events coordinated by the Faculty of Medieval and Modern Languages, the Oxford Bach Soloists and Bonn Week. 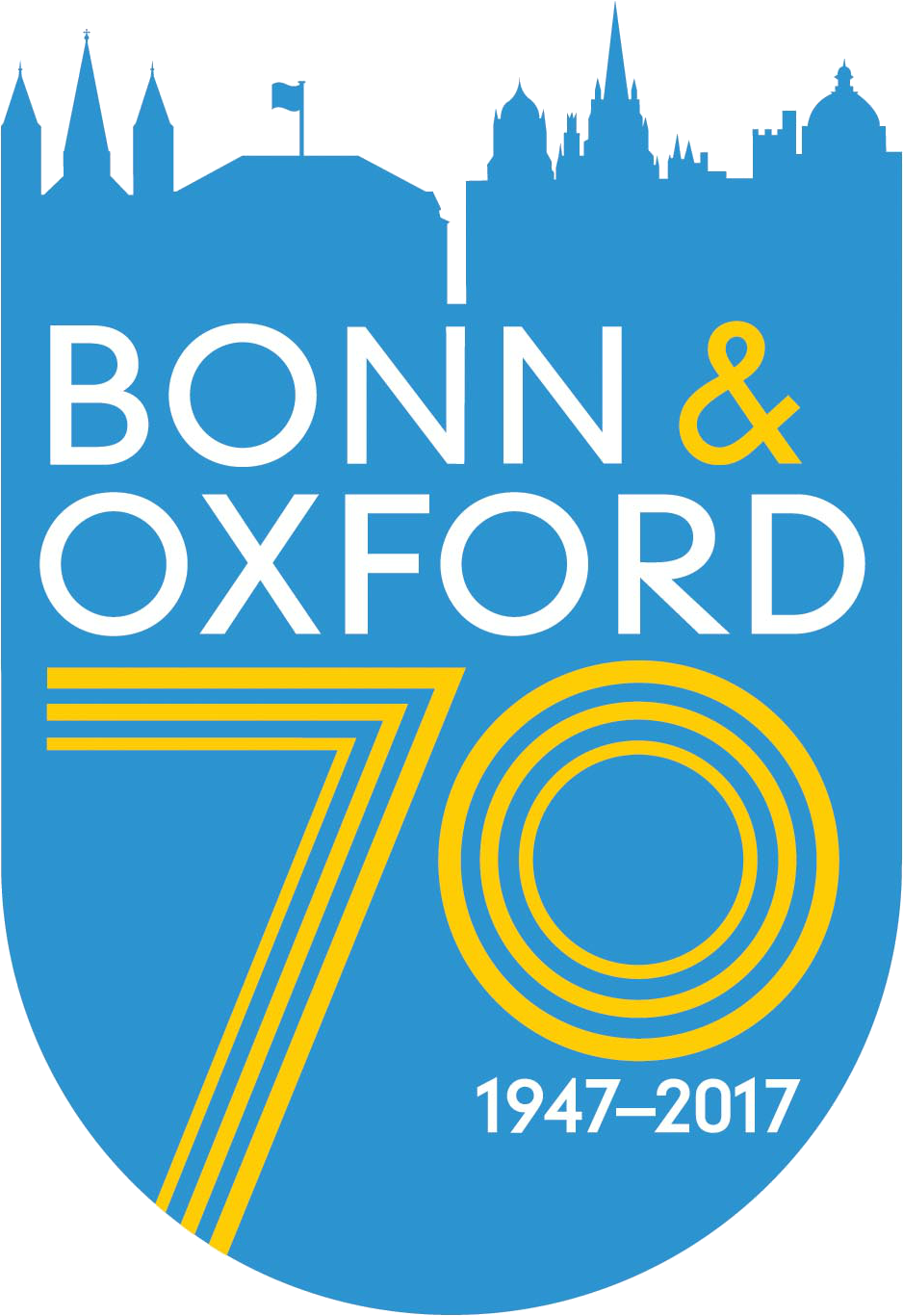 During the afternoon, Tom Hammond-Davies and Henrike Lähnemann discussed musical and theological themes of the cantata, supported by Charles Maxtone-Smith at the organ and introduced the audience to the two iconic chorales integrated in the cantata, ‘Nun danket alle Gott’ and ‘Nun lasst uns Gott dem Herren’. This allowed then everybody to join in the singing during the double performance of the cantata. True to the theme of the cantata – God as sun and shield – it was a splendid performance with the two solo-horns shining as descants over the orchestra, the Oxford Bach Soloists and the full congregation. Read the full cast list and an introduction in the programme.

The two performances were linked by a reflection on Psalm 84 on which the cantata is based by Gordon Woods, himself a member of the congregation:

Before I begin my short reflection, I would like to echo Henrike’s welcome; it is very good to see everyone here, and I would like to thank you for coming, Henrike and Tom for organising today’s event, our musicians for all their work, the people who have welcomed you, given out programmes and served tea and coffee, and the German Embassy for funding this event. My name is Gordon Woods, and I serve as Joint Church Secretary in this church, and I and my partner have been enthusiastic supporters of the Bonn Oxford link for a number of years.

I had intended this talk to be a double-act with our friends Elmar and Ursula Conrads-Hassel from Bonn, but sadly they are unwell and were unable to join the Bonn delegation this year. I am sure we all wish them a speedy recovery.

We’ve just heard Cantata 79 – Gott der Herr ist Sonn und Schild – which takes its title from a line in Psalm 84 – in a modern English translation that would be ‘For the Lord God is a sun and shield’. Does it feel a little strange to be marking 500 years since the Reformation in Oxford Bonn week? Is there a dissonance between the separations initiated at the Reformation and the links we celebrate between Oxford and Bonn? Perhaps, but I think it also gives us an opportunity to reflect on how much we share beneath the surface.

Bach cantatas are not part of the staple musical diet in many British churches; indeed, this may be the first time in the 102 year history of this building that a Bach cantata has been sung here! But if you look in our denominational hymn book, Rejoice and Sing, you’ll see that no fewer than nine Bach tunes are included. Similarly, despite the importance of Martin Luther, there is no significant Lutheran church in the UK (and I’m afraid we only have four of his texts in our hymn book). This church is part of the United Reformed Church, which draws its heritage more from the Swiss reformers like John Calvin than from Luther (and in case you’re still running the scorecard, there’s only one text attributed to Calvin in our hymn-book, and that’s marked with a question mark suggesting the compilers weren’t altogether convinced of its authenticity!). But despite our differences from the Lutheran churches Bach wrote for, let alone our Roman Catholic friends, the text of Psalm 84 is very familiar.

Singers among you may have sung settings including Vaughan Williams O how amiable – or indeed Brahms’ Deutsches Requiem, where Psalm 84 provides the fourth movement. You may have noticed as you came in that the door to this church says it was a ‘Presbyterian Church of England’ – that is, in the Calvinist line with a similar form of church government to the Church of Scotland. In 1972 the Presbyterians and the Congregationalists in England and Wales came together to form the United Reformed Church, and one of the contributions of the Presbyterian strand of the church to hymnody is the metrical Psalm, and I’d like to invite you to join me in singing the metrical setting of Psalm 84 you’ll find at 703 in the blue hymn books. As a side note, the tune here was written by Henry Harington, who studied at The Queen’s College here in Oxford – just over the High Street.

[Sing Rejoice and Sing 703: How lovely is thy dwelling place, Scottish Metrical Psalter, 1650]

You’ll observe that this is a fairly simple setting – short rhyming lines that are singable and memorable. Luther might not have approved of all those syllables spread over more than one note though!

Many British people even if they are not particularly religious will probably be carrying around snatches of the Psalms – perhaps most commonly Psalm 23 – the Lord’s my shepherd – closely followed by Psalm 90, particularly as rendered by Isaac Watts, as Our God, our help in ages past. Let’s sing that now before we go on.

Again, a simple Common Metre tune, but this time words from the Congregationalist heritage of the United Reformed Church. The compilers of Rejoice and Sing have reverted to Watts’ original text, beginning ‘Our God, our help’, rather than the more familiar ‘O God, our help’ that John Wesley popularised – when we amend Charles Wesley’s hymns to take out sexist language and archaisms, perhaps we should remember that he and his brother John didn’t hesitate to amend someone else’s text when it suited!

These are just a couple of examples from my tradition – the church worldwide has found many ways to pray the psalms, ranging from the deceptively difficult Anglican chant (which is really quite hard to sing well) to complex polyphonic settings and many others. And hymnody is no respecter of human barriers; a good piece will travel far beyond the confines of its author’s confessional or national background – as we saw this morning when German and British people from Protestant and Roman Catholic backgrounds shared in singing familiar hymns.

I’ve stressed the memorable nature of these settings – and it’s certainly true that as we get older and frailer, familiar songs are some of the last things to desert us. As my mother was in her last weeks in hospital last year she got more and more confused as a result of the dementia and the cancer, but when I put the radio on to Radio 3’s broadcast of choral evensong one afternoon, the choir sang the hymn All creatures of our God and King, to the tune Lasst uns erfreuen, and she started singing the alto line. Music stays with us when we lose so much else.

And when we remember that the Psalms form part of the Hebrew scriptures, we can imagine them being read, prayed and sung in some many contexts – in the home; in the Babylonian exile; across the world after the fall of Jerusalem. The faith is preserved by these familiar texts even when people are fleeing for their lives.

And so back to Psalm 84, and the confidence of the Psalmist that those who trust in God are blessed by God – as verse three says, even the sparrow finds a home, and the swallow a nest for herself, where she may lay her young. In recent years we have seen many human sparrows and swallows fleeing conflict and natural disaster, and many of us in this country have watched the leadership of Angela Merkel with admiration as Germany has welcomed so many of them. In this church, we collect food and hygiene essentials every month in support of Asylum Welcome, a local charity working with refugees and asylum seekers, and there are many others in Oxford working to support refugees.

As Alan Pope [Chair of the Oxford-Bonn link committee and former Lord Mayor of Oxford] reminded us at the ecumenical service this morning, as we mark 70 years of the Oxford/Bonn link, we cannot forget that the link was forged in the aftermath of terrible conflict and suffering, in which millions died and millions more were displaced from places they and their families had lived for centuries. I am glad that our predecessors were prepared to hold hands across a divide, and hold out the promise of peace and harmony even when the contrary was all around to witness. Our retiring collection today will go to Christian Aid’s work with refugees, which includes providing hot meals, water and washing facilities, housing support and legal services to unaccompanied children, working in Greece, Serbia, Syria and many other places. Let us hold out the hope of peace and security to even these vulnerable people. (Update after the event: The retiring collection raised the proud sum of 459 GBP.)

I’d like to close by sharing a new version of Psalm 84 written by our former Minister here, the Rev. Dr. Carla Grosch-Miller. Carla has written a number of poems inspired by the Psalms, which illustrate how ancient texts can continue to inspire each generation in new ways:

How beautiful, how bountiful is the earth!
How astounding, how awesome are the heavens!
As far as the eye can see and beyond,
by telescope and microscope,
creation’s glory expands the heart in wonder.

The scent of a rose in an overgrown garden seduces.
Gigantic orange poppies with purple-black centres stun.
The surround-sound of birdsong uplifts.
The dance of butterflies around buddleia tickles,
promising sun-warmed blackberry juice
at summer’s end.

I fall to my knees in thanksgiving and praise.
May my eyes ever be open to Your splendour.
May my ears ever be tuned
to the pulse of life and the song of stars.
May my heart ever be receptive
to the real and the holy within it –
in pain and sorrow,
in plenty and want,
in joy and gratitude.

And where Your people gather
to remember and recollect,
to give thanks and to respond,
to be called to awaken
to being blessed and a blessing,
There, O God, may I serve.
Hands open and lifted,
welcoming song and silence,
willing to be filled, moulded and used.
There I would open the door to all who seek You
and all who long to sing You.
There I will offer my paltry gifts
for the unending renewal of the human spirit,
the great flow of Your love
in all and through all.